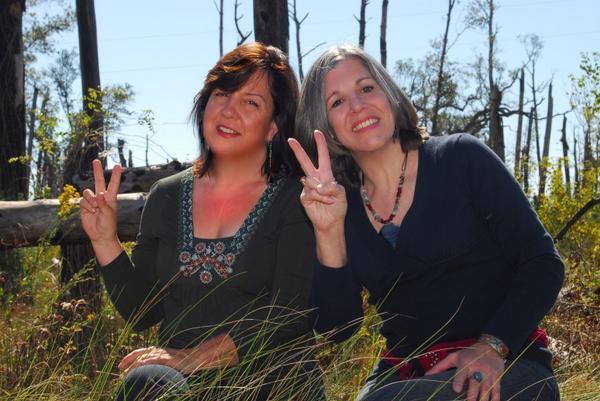 Some of you older music fans may remember a time when a certain local environmental/political folk musician graced the Marquee and other media outlets. Karen Harvill, once a Mississippi Mama, is now teamed up with long-time friend and fellow folk musician Jo Billups. The pair make up the recently formed group, Sassafrass. With all the talk of global warming, the two passionate artists could not simply sit back without saying a word; so, once again, they’ve picked up their guitars and started singing. Most of their gigs have been in coffee shops in the Pensacola area; however, they have traveled as far as Ohio to perform in “green” festivals. This past Saturday was International Climate Day. To call for a clear solution to the climate crisis 350.org organized 5200 rallies in 181 countries around the world, the most widespread political action in history. The New Orleans rally, which was Sunday in Congo Square, featured Sassafrass, Leon “Kid Chocolate” Brown and the marching bands from Sophie B. Wright School, Martin Behrman Charter School and O. Perry Walker High. There were speakers from 350.org, Alliance for Climate Protection, Alliance for Affordable Energy and The Coastal Restoration Network.

Sassafrass performed before and after the marching bands. Their theme-appropriate lyrics, voiced as sparkling harmonies riding on top of catchy guitar runs and compelling rhythms, served as good background music for the opening of the rally. Even for those in the audience who might not have been environmental loonies or lovers of folk music, it was a welcome respite from the foul-mouthed snowball saleswoman heaping abuse upon a fellow street vendor just outside of Armstrong Park. Once everything got started you could hear such poignant songs as “Water Wars” and the more eloquent “White on White” and “Wolves” projecting across Congo Square.  This might not have been their most energetic performance, but it was still clear that the ladies are musicians first and foremost; definitely not your average coffeehouse band.

As a former band geek, one must give kudos to “Kid Chocolate” Brown’s mad trumpet skills and, of course, to the middle and high school bands that performed as well.

With Sassafrass at the head of the parade (sporting gold umbrellas with scenes of melting ice caps and sad polar bears) the group danced second line through the Quarter to DBA on Frenchmen St. to watch the Saints play the Dolphins.

Whether you are interested in saving the environment, or simply a folk music fan, Sassafrass is a must listen.  You can check out both Sassafrass and Leon “Kid Chocolate” Brown on MySpace.