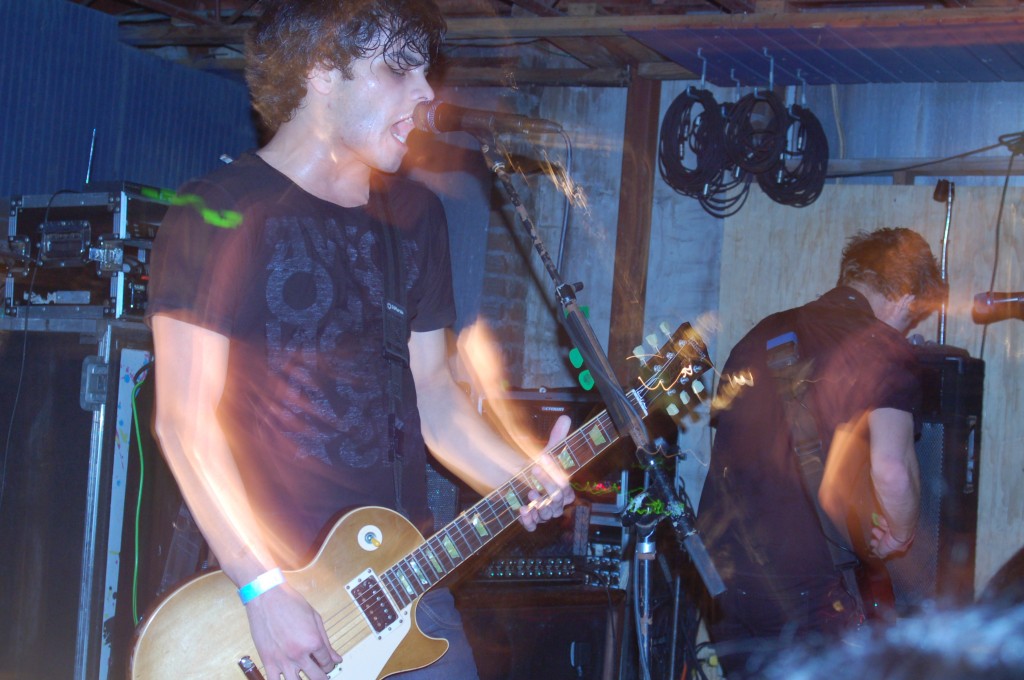 Tuesday night, as it does on just about any given night, High Ground in Metairie, Louisiana, hosted an “all-ages” rock show. The evening’s lineup was comprised of headliners Hit The Lights, joined on the tour by the pop groups I Rival, Sparks the Rescue, Fireworks, and There For Tomorrow.

All of the bands were decent musicians and tight, as a whole. However, some aspects of certain bands’ stage shows should be noted. It needs to be understood that the High Ground is an ALL AGES venue.

Sparks the Rescue obviously misunderstood the nature of their audience, to stand on a stage and feel the need to announce what each song is about with descriptions such as: “This next song is called Skeletons. It’s about bone-rs….” Then, when there is a blatant awkward vibe in the room, the front man feels the need to explain himself to a room full of 14-year-old girls and a few mothers, “the song is about bones….. boners.” One would naturally think that, after his first attempt at humor wasn’t appreciated, he would back off, but, to the audiences misfortune, he did not. He went on to explain another song as being about oral pleasure and, if anyone would like to see the group of guys giving each other oral pleasure, they could find them in the van. He went on to open another song by saying it was about having too much of “the devil’s lettuce” and announcing that, if anyone knew where they could get some “devil’s lettuce” to come find them after the show. As if the band’s stage manners weren’t appalling enough, it is to be said that, as a pop band, you are expected–at least to some degree–to be heartthrobs. Showing up for a gig with greasy hair and having forced your, by most standards, chunky body into a pair of skinny jeans doesn’t usually scream heartthrob.

Although the next band, Fireworks, would neither be classified as heartthrobs, by most girls’ standards, nor as flawless musicians, they were at least a wholesome-looking group of guys who put on a show that had even your most unlikely audience members, with their hands in the air, singing along. Near the end of their set, the band suddenly stopped playing for one of the guitarists to ask everyone to chill out (a fight had broken out in the audience). Upon being cursed at by one kid involved in the fight, the guitarist shouted “my bad I thought he had something of value to say” and the band once again started playing. The kid continued to provoke the band, looking for things to throw, according to guitarist Chris Mojan. Once they had finished their gig, multiple fights broke out. The the drummer asked the kid if he wanted to go and just talk but, according to Mojan the kid started trying to fight again. The High Ground’s security and one of the sound guys had to help break up the evening’s violence. Mojan stated how embarrassing it was for them to be the band up there when everything broke out “we don’t support violence in any way; our music doesn’t provoke violence, it’s not even aggressive”.

Once the audience had settled down from the fights, the band that shined above all took the stage. There For Tomorrow holds the complete formula for a pop band. Each member is attractive, appropriate, charming and, not to be forgotten, the music is up to par.

The quartet has been together since 2003. Upon graduating high school they decided to start touring. They have won multiple upcoming artist awards, played Van’s Warped Tour this past summer and, upon finishing up this tour in their native Orlando, will be heading out again with Mayday Parade. Despite all the positive attention, they are still looking for more. Even though Maika Maile says he doesn’t want them to come across as needy and wanting to be in the limelight, as can be expected, the young musicians want success and deserve it. Their songs are well written, with catchy lines, not so typical minor harmonic lead riffs and flattering rhythm partnered with tight backing-bass and drums.

If you’re looking for the next band to follow until they hit it big, it would be recommended you jump onboard with There For Tomorrow as fast as you can.